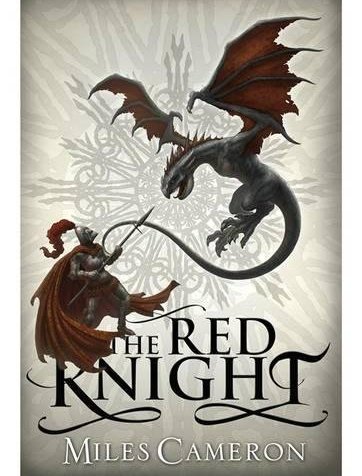 Who is the Red Knight?

This is a question that runs through the heart of the book and provides plenty of mystery around the main character that keeps you reading in an effort to find out more about the elusive identity of the titular character.

The book starts by dropping you straight into the action with the Red Knight and his mercenary company hired by the head of a religious Abbey to hunt down a solitary monster responsible for killing a local family. However, it soon becomes clear that the situation is not all as it seems and the Red Knight – along with the Abbey and surrounding lands – may have bigger problems than originally bargained for!

The book is set in a sort of quasi-medieval England with references to real places in England (Sir John of Reigate), Jesus, and other European countries. As this setting is a fairly familiar one, it allows the author to focus on the plotting and characterisation rather than spending time giving us large amounts of worldbuilding information. Information is introduced gradually through the characters and their knowledge/experience of the world.

There is a number of POV characters in the book and at first I did find it a bit of a struggle to get my head around who everyone was (however this may have been because I was only reading short sections at a time when commuting, rather than anything to do with the story). The author also mitigates this slightly by clearly labelling each section with the POV characters name, which I didn’t start paying attention to until a way into the book when I realised there was going to be more than one or two POV characters! The POV characters are not all introduced at the beginning of the book but are only inserted into the narrative when they are involved in events that move the story forward. This also helped to keep things on track as, by and large, we are only provided with information that is relevant to the story (either in this or later books). Whilst at the time some of the events/information may seem unnecessary the author does a very good job of bringing all the separate story arcs together for the final section of the book.

The characterisation is handled well, especially in relation to the Red Knight. I loved how, whilst he was a POV character, enough information is withheld that means we do not know what the Red Knight has planned and (especially in the battle scenes) we do not discover what he will do until those in his command – or indeed the enemy do! This keeps the story exciting to read and allows the author to successfully walk the boundary between giving us enough information about the Red Knight to care about him and the events of the book whilst still maintaining his air of mystery. I also loved how the Red Knights character strikes the right balance between arrogance and irreverence without seeming annoying, and moments of emotion, character development and human connection seemed all the more touching. The rest of the characters are diverse and well written with their motivations and actions realistic. The author successfully places women into strong, and sometimes traditionally male, roles without it feeling contrived or out of place.

The fight scenes are exciting and events are realistic, dirty and gory with no punches pulled. The authors knowledge of medieval armour was good and he successfully avoided the pitfall of showing off or shoving it in our faces. The magic system was also well handled with enough information given to get a good understanding of what was possible and to avoid deus ex machina type scenarios but still allow for a sense of, well, magic.

My only criticism is that there was minor but frequent spelling errors throughout.

Overall I greatly enjoyed this book and am eagerly devouring the subsequent novels in the series!!

What am I Currently Reading?